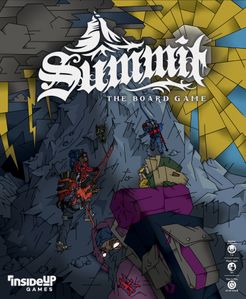 Summit: The Board Game is a survival game which, thanks to its two-sided game board and variable mechanisms, can be played competitively, cooperatively or solo.

In a competitive game, players race up and down the deadly mountain while managing their resources, building their path, overcoming obstacles, and attempting to survive their competition. Summit uses a unique karma system that allows players to actively help or hinder their opponents — but it also affects end game scoring. For a few extra points, you could share some of your valuable food or oxygen, or maybe you can afford to lose some points so you choose to cut their rope and watch them disappear down the mountain.

In a cooperative or solo game, players must now work together to overcome the mountain and survive the expedition. Summit is a game so grueling you need only one team member to survive the ascent and descent, so players may sacrifice themselves for the good of the team. The mountain has a “Sherpa Track” and a “Time of Day Track” added, as well as a whole new deck of cards. It is unlikely everyone will be returning from this expedition.