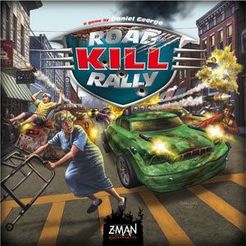 From the developer: “Road-Kill Rally simulates the fast paced action of futuristic motorized death sports where superstar drivers in weapon-laden cars race through the streets of America in search of blood, fame and fortune. Points are scored by killing pedestrians, destroying competing drivers and racing across the finish line first. The surviving driver with the highest number of points at the end of the race is the winner.”

2035 – The Road Kill Rally becomes a worldwide phenomenon, attracting contestants from throughout the world. Ratings exceed three billion for the Rally Cup Finals, making it the most watched spectacle in human history.