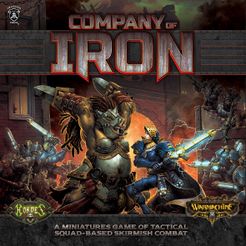 The Company of Iron box set is designed for two players and will contain two 20-point armies, including a unit of Cygnar Stormblades and a unit of Minion Farrow Brigands. Additionally, two all-new character solos will be included to lead their respective units: Lieutenant Gwen Keller and Agata, Queen of Carnage. These new models can be used in both Company of Iron and in WARMACHINE and HORDES. All components needed to play the game are in the box set, including rules, tokens, and two types of cards that allow players to choose specialties for their squad leaders as well as battle plans that can provide powerful effects and advantages in combat.