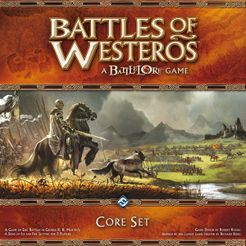 In Battles of Westeros, two players recreate the military conflicts set in George R.R. Martin’s A Song of Ice and Fire series, taking part in battles directly from the books… or designing their own. In this epic board game of battlefield tactics, players control either House Stark, the wards of Winterfell who have called their hearty allies to defend their honor and lands, or House Lannister, an aggressive force funded by Casterly Rock’s endless supply of gold.