So, Day 2. Very little sleep was gotten between the ride home and the being all jacked up from Day 1 and the need to wake up earlier than the day before. As it turns out, there was much less traffic on Saturday and there were no road problems and no parking problems as I got a pretty sweet spot in the BCEC lot. cool start. I got there about an hour early so they have you stand in line. 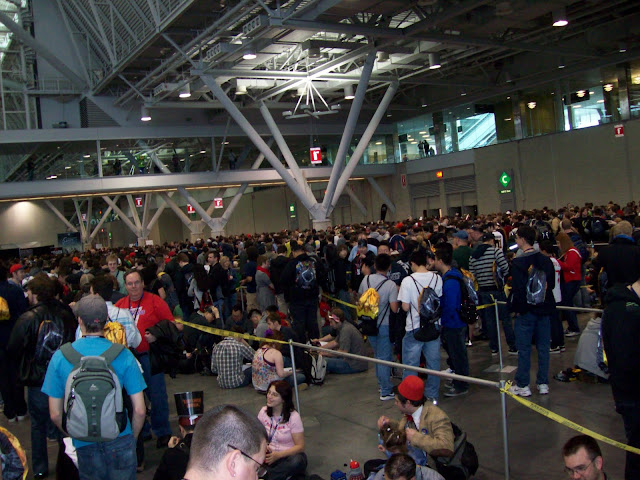 but it’s not really a sucky line because there is stuff going on, people in cos-play to look at, people playing games like Magic: The Gathering, Nintendo DS games, beach-ball bounce around, and also people walking around handing out cool stuff, like codes for PAX exclusive League of Legends skins (Sivir). So there is stuff to see and do even in line. But you can also just sit down and rest if you want which is cool.

So they let us all in and I head straight for the table top area. I get a demo of Yomi which is a neat card game based on a Street Fighter like video game. So you each control a ‘fighter’ and each fighter has special attacks which are represented by different combinations of cards. The main mechanism is rock-paper-scissors. Block beats Attack, Throw beats Block, Attack beats Throw. And certain fighters can combo better off certain things, so you kinda have to guess what you think your opponent is going to do and then try to do the counter. You can also charge up each fighters special abilities which do a lot of damage. All in all it’s fun although a little confusing at first as there is a lot of stuff to read on the cards and it’s not as intuitive as you’d think with the RPS mechanism.

After that, there was a spot open for zPocalypse so I sat down for some zombie killing goodness. At its core, zPocalypse is a post apocalyptic zombie survival simulation. You have some humans whom you control and you can get them gear to use like armor and guns or melee weapons like axes and baseball bats, and you have a certain amount of food to feed all your people and you have to try to find more. Where is the food? It’s out among the zombies of course. So you gather your troops and fight through some zombies rolling dice for attack and defense and sometimes you kill the zombies and sometimes the zombies bite you. If you are into this sort of zombie theme you will dig this game i think. It’s very much like a simulation though, you build traps and barriers and things and you have to last a certain amount of days. Whereas Last Night on Earth is like playing in a zombie movie, this game is more gritty and realistic. Fun though.

There’s also a ton of miniature gaming going on at various tables. And tons of great scenery. Here’s some cool stuff: 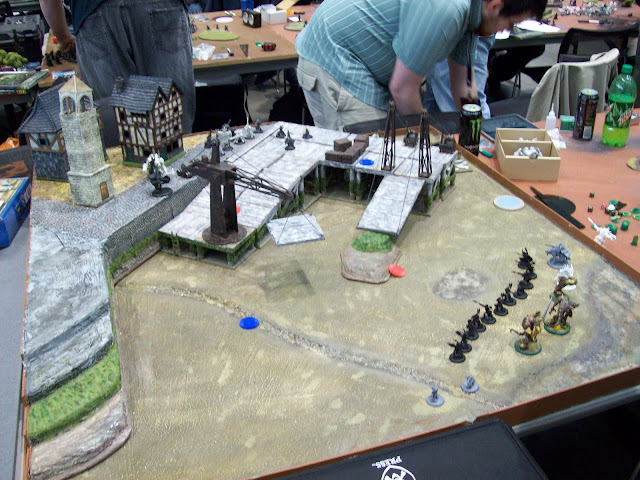 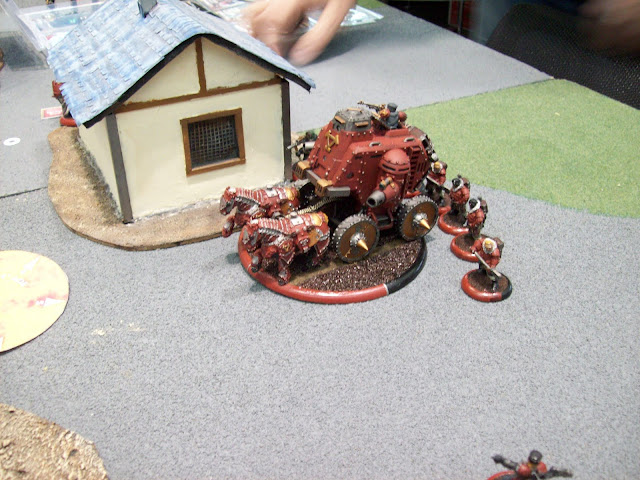 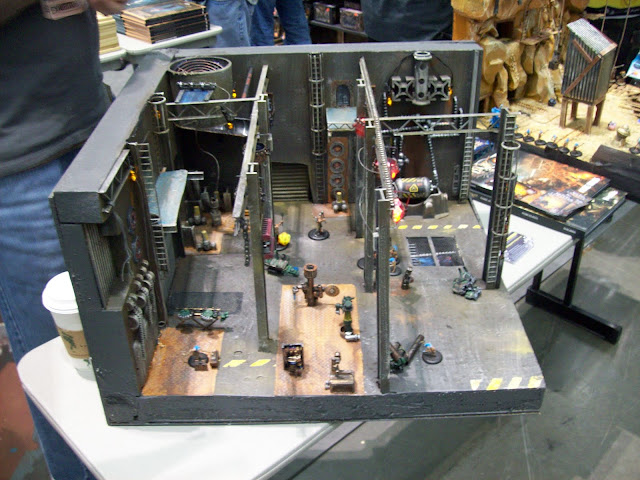 there are also vendors there selling all sorts of stuff. Here’s one selling a bunch of lego mini fig’s: 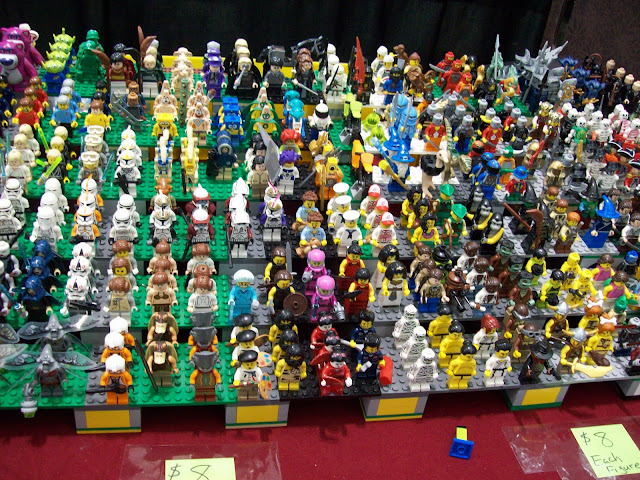 too expensive for my tastes though. They were asking in upwards of $15 for some of the mini fig’s. ouch.

After I grabbed some lunch I headed to the Paizo booth because I had signed up for an intro game for the Pathfinder Society which is kinda like a game of D&D but in a persistent world. There were something like 7 or 8 of us in one group. Too many I think. But the DM did a fairly good job, even though he fit all the stereotypes of the DM and made all the stale jokes about how few hit points wizards have and things of that nature. I played a cleric and didn’t have much to do except cast light and 1 heal spell, oh and 1 detect magic spell. But I got a taste of the interesting things they are doing with Pathfinder and I’d like to get more into it. I bet with the right group, this would be what I’m looking for roleplaying wise. Here we were sent into a run down dock warehouse to retrieve some documents out of a crate when we get attacked by some giant rats: 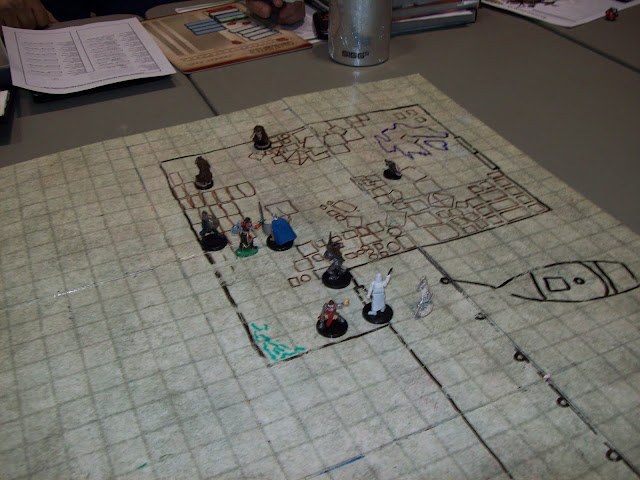 that’s me near the warehouse entrance with the red loin cloth thingy. We dispatched the rats and retrieved the entire crate by floating that nearby boat under the holes in the floor of the warehouse. Here we had to kill this succubus looking woman’s pet imp to get the item we needed (she hated the imp): 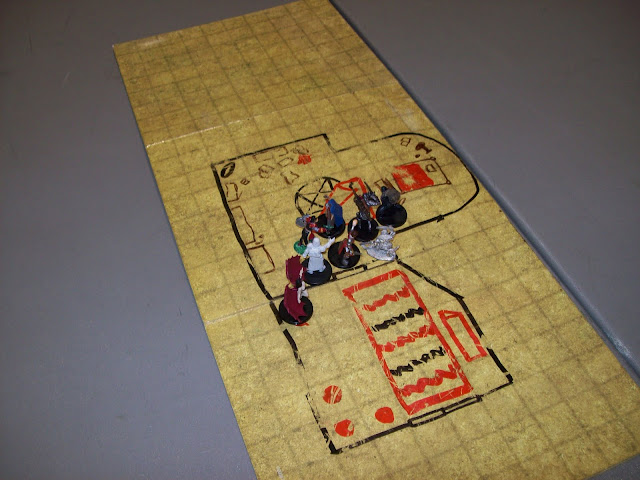 After that, I headed to the tabletop ‘tournament’ area to see a Robo-Rally Gauntlet which I had missed entering in because I had played Pathfinder. There were 16 people (2 groups of eight) all playing Robo-Rally and having a really good time. They had 3 flags on one board, and then when they reached that 3rd flag, they would be teleported to a second board with 3 more flags. The top 8 players would then have one last fight: 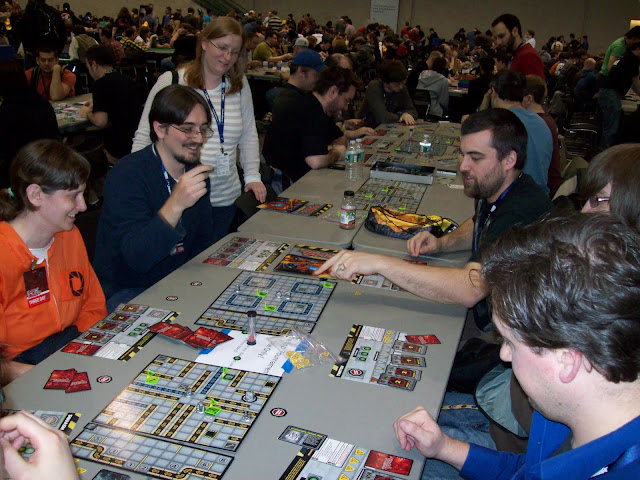 I did not stay to see who won.

That’s another great thing about this convention. There are people playing games EVERYWHERE. I bet I could have asked in to any game I came across and if there was room and time, I would be let in. Here are a bunch of games being played in the Hotel lobby (i headed over to that area to get a coffee). Dominion: 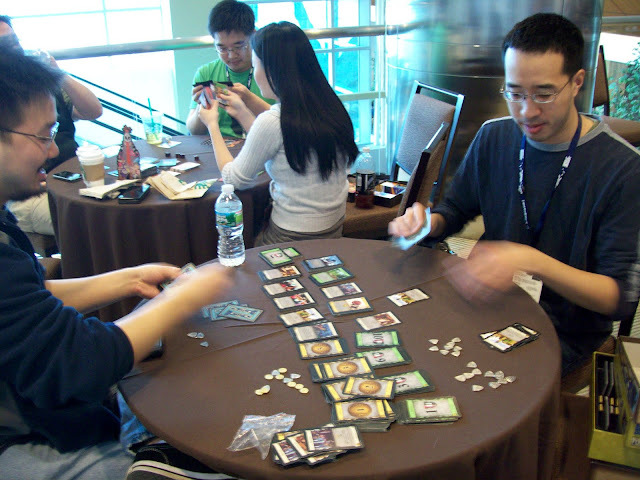 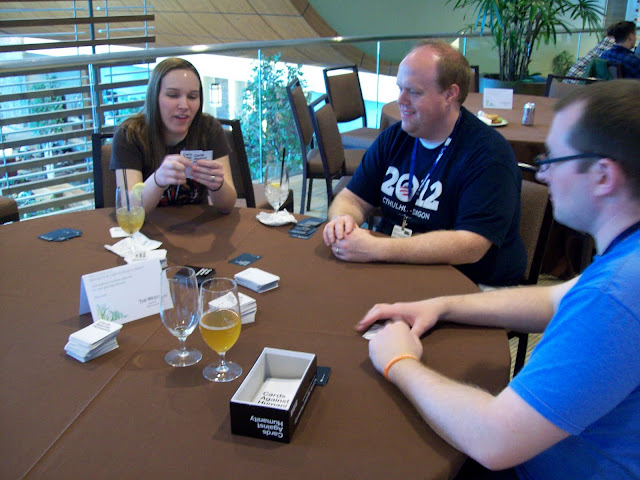 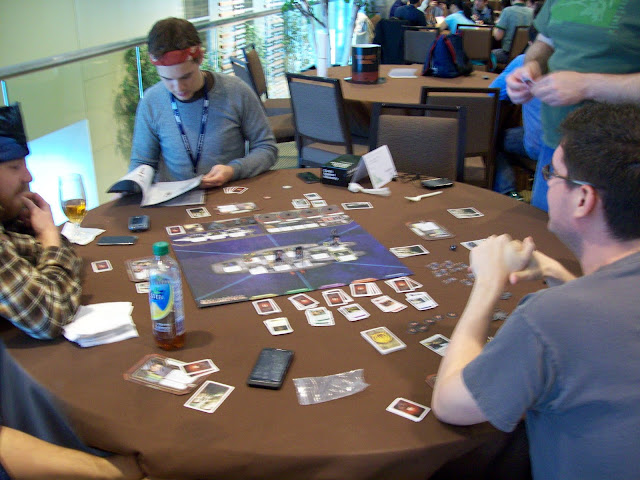 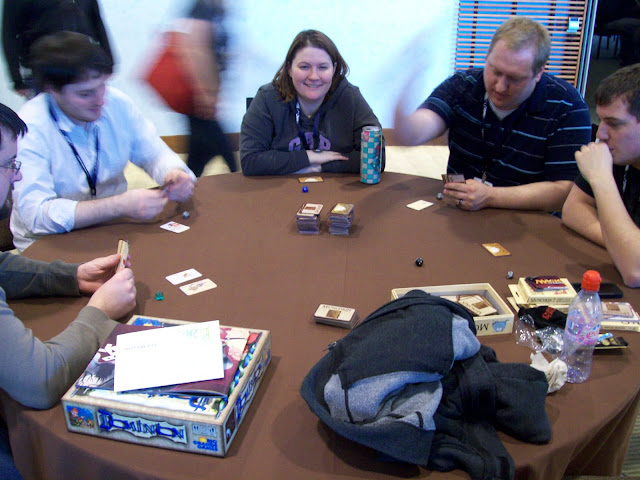 and here’s what the entire tabletop area looks like shot from one level above: 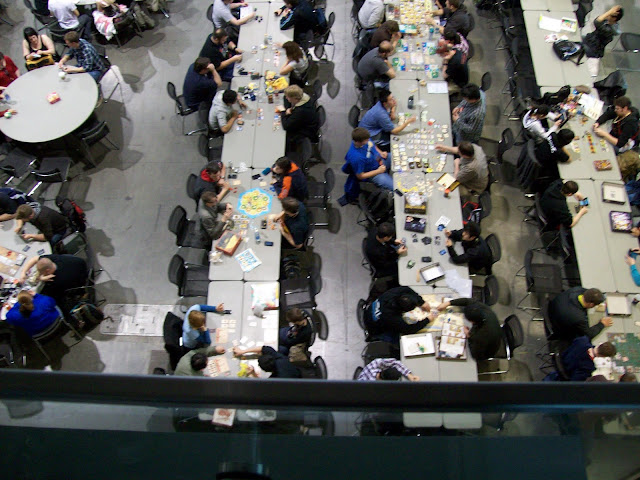 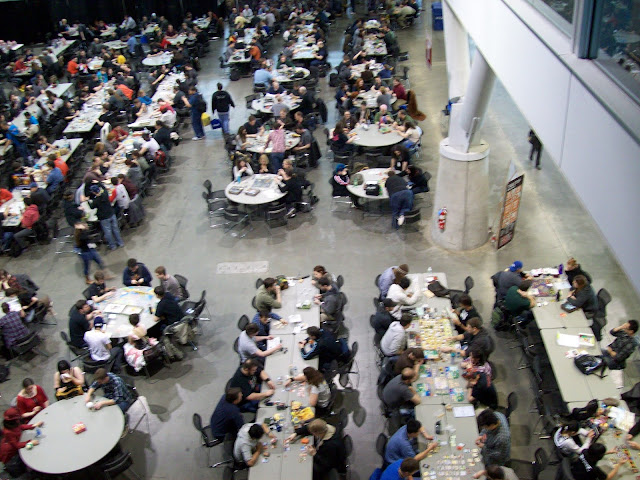 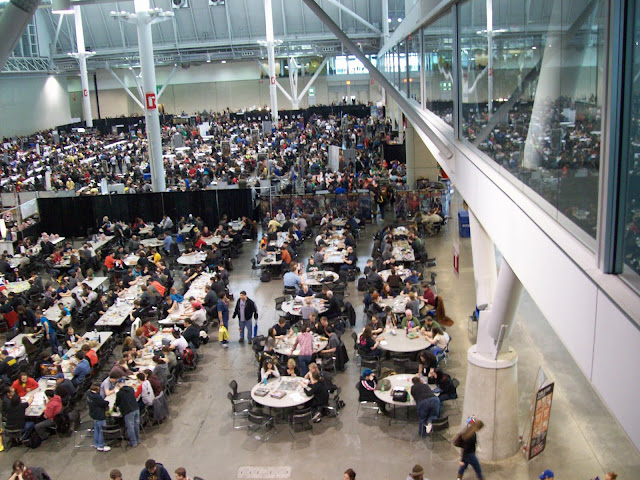 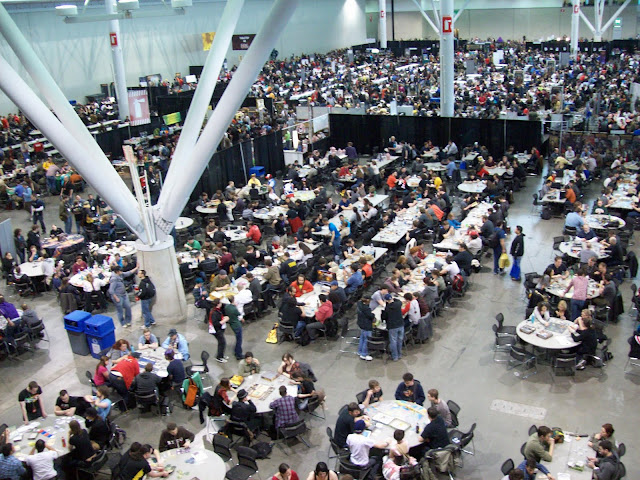 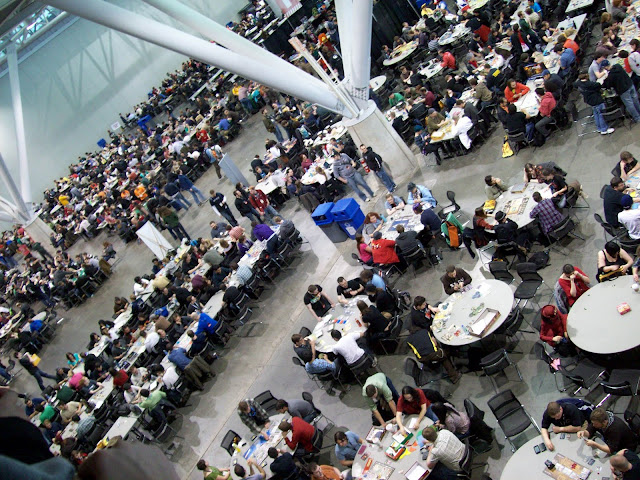 So cool to see so many people playing Board Games! If you’d like to see all the pictures I took from PAX East you can view them in this album Here but be warned, there is a lot of blurry stuff and just bad picture taking in general.