Next year I must remember to leave a bit earlier to avoid more traffic. If you’ve ever been to the BCEC you know that to get there you need to go through downtown boston, which isn’t fun on Friday morning. I’m thinking maybe next year I search for an alternate exit and take a back route (andrew sq maybe). In any case, I got there in one piece but had to park in the overflow parking garage which was inconvenient for a few reasons. We had to wait for the elevator because he stairs were ‘broken’. Yea, the stairs were broken. And then we had to wait for a shuttle to take us to the BCEC. It wasn’t that bad, but after dealing with traffic and everything else, you kinda just want to walk in and get to the good stuff.

So I get inside and because I had no desire to see the key note speech this year, we hit the exhibition floor. The place is huge and there are people everywhere. Most of them are not looking where they are going because there is so much to see and flashy lights and people in cosplay, etc. Here’s the Mayfair Games booth: 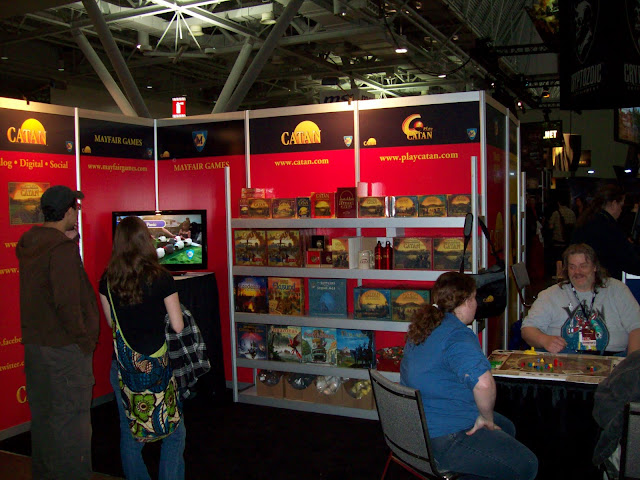 they featured Settlers of America 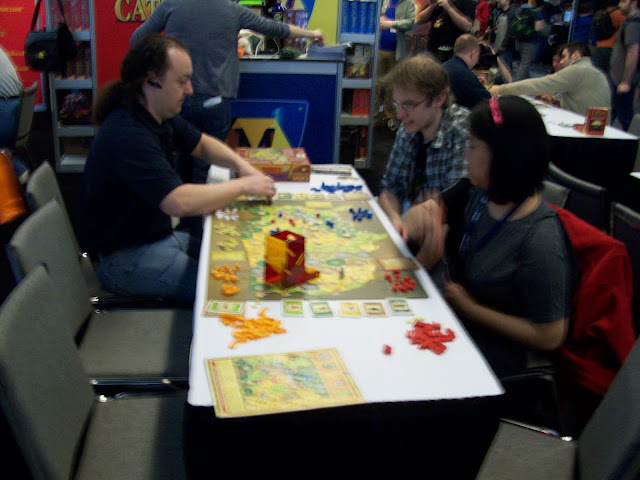 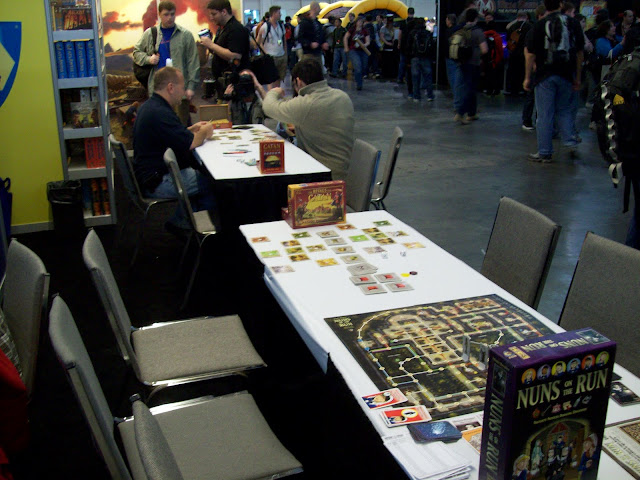 We found the Wizards of the Coast (makers of D&D) booth and there was no line to get in, so we watched a short movie about the Underdark and took some pictures. Here’s a Drider: 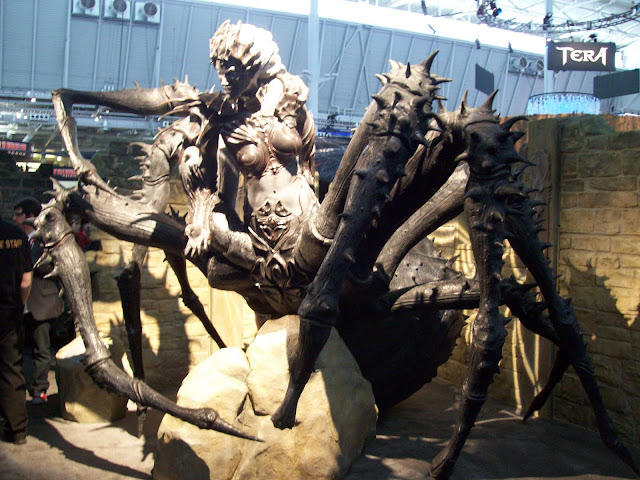 and, of course, here’s Drizzt: 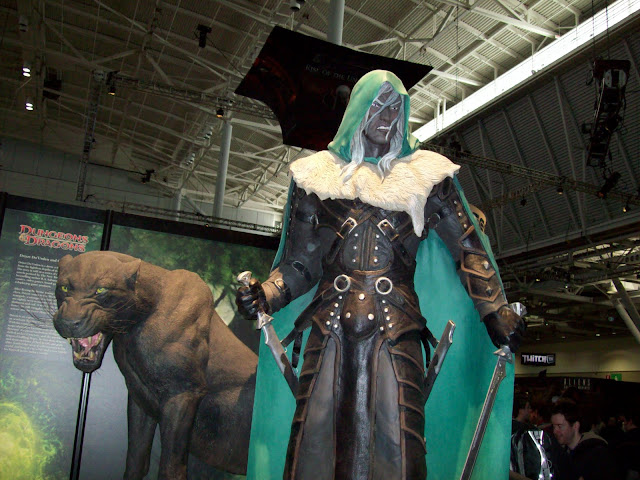 We also hit the booths of Riot Games (makers of League of Legends), Pocket Watch Games (makers of Monaco), and a few others before heading to the TableTop area. After scoping it out, we quickly found a game of BANG! to hop in. 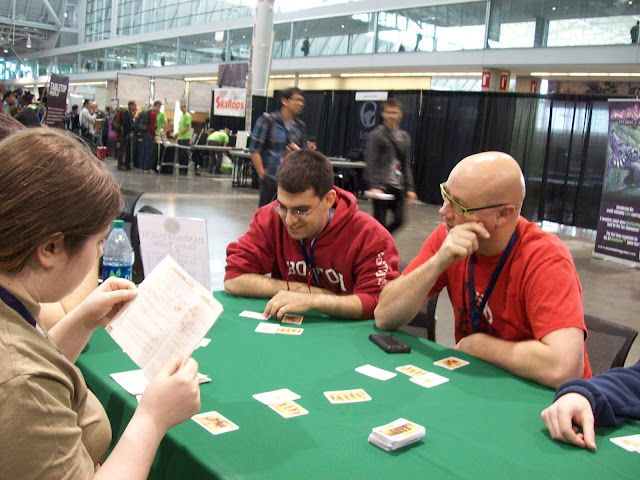 Bang is a great game, but this specific game was pretty lackluster. There were 7 of us which usually makes for a great game of BANG! but this one ended without it even making it once around the table. The player to the right of the Sheriff didn’t even get to go because the outlaw to his right played the Volcanic, then proceeded to kill him, and then the Sheriff. The game was over before it even started really. But that outlaw basically shot the moon. (HA! Shot!) 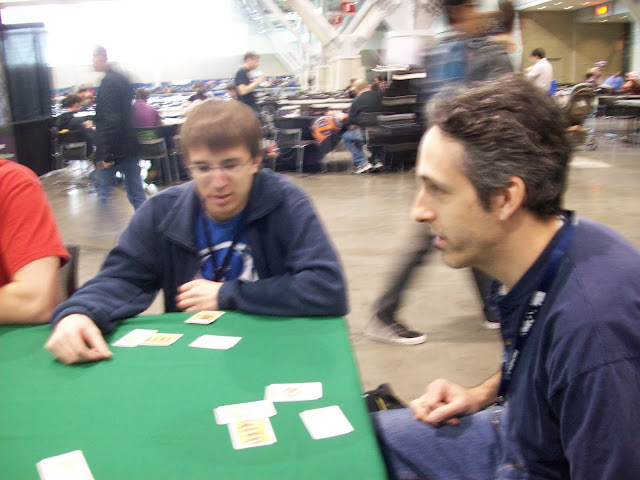 We then moved on to the Fantasy Flight area and although no one was there to guide us through a game, we figured out Wiz War on our own. We might have gotten some of the rules wrong, but we all had fun so that’s all that really matters. I remember playing a ‘throwing stone’ card on the first turn and just having it sit there all game. I ended up dissolving a couple of walls and using a spell that allowed me to move any number of spaces in a straight line very strategically. The throwing stone (does like 1 or 2 damage) quickly became a running joke, but what was really funny was that I was able to use it to get the killing blow on an opposing wizard which actually got me the win! 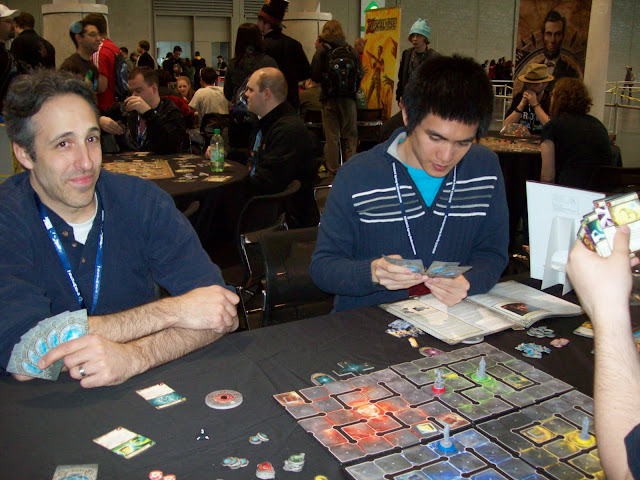 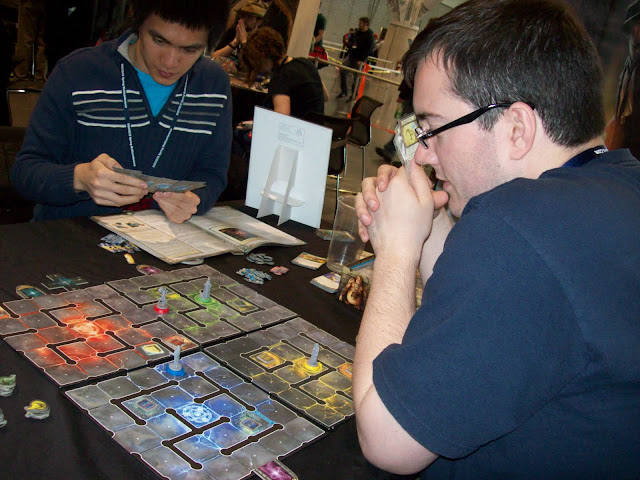 It’s pretty much like the original, it was fun and the pieces/tokens were great, even though we didn’t use even a fraction of them.

We then took a break from the TableTop area and headed to the Vintage Arcade area. This is where the American Classic Arcade Museum (ACAM)sets up an entire room to make it look like a vintage 80’s arcade, with 80’s music blasting, a laser light show and arcade machines from my youth all free to play. I think I played about 20 levels of Gauntlet 2. So much fun. Then a buddy and I played this gem called Minefield. 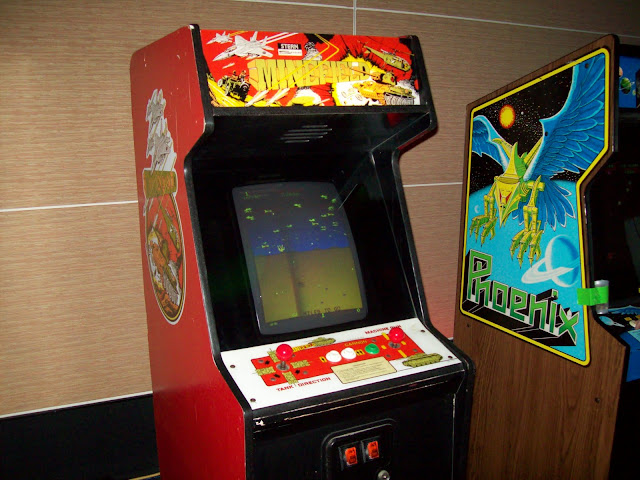 He steered the tank and I took over the guns, and yea, we made the High Score list a few times. Fun Stuff. The last game we played of the day was a game of the newly re-released Battletech. 6 of us went at it in a free for all. 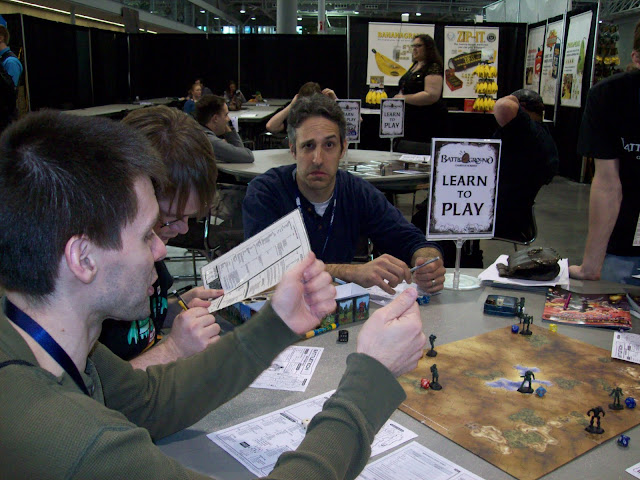 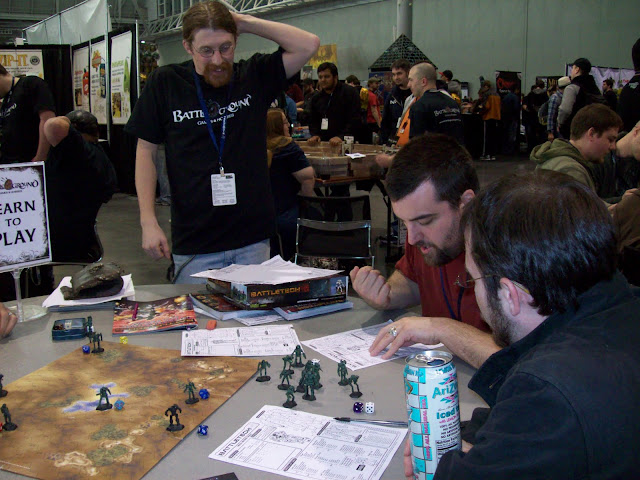 With one person there to guide us through the rules, all the memories of playing this as a kid came back. All the classic ‘Mechs were there, too.
Here I am in the middle in the water taking on all comers! 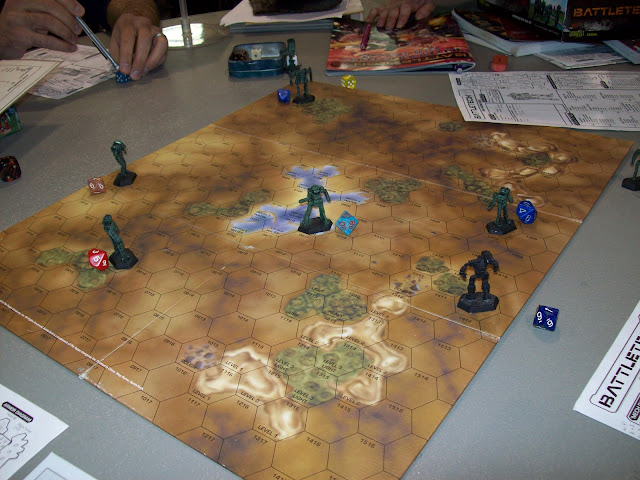 Eventually, we realized that there was one of us that was just hanging out on the edge of the map shooting at eveyone and not taking damage. A quick alliance was made and we all turned towards the coward: 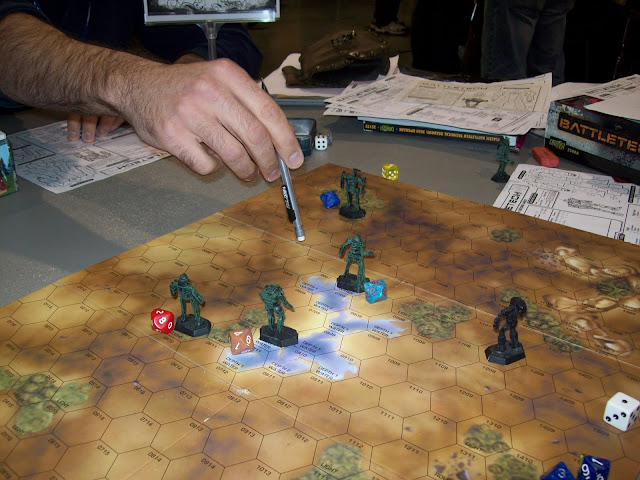 Here’s where I tried the ‘death from above’ move. 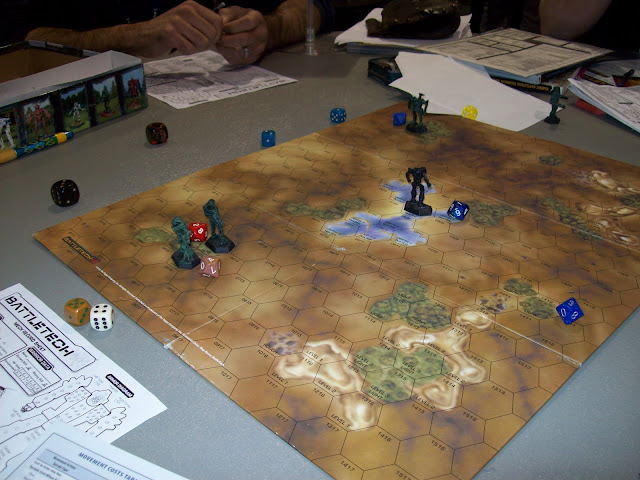 It was cool, but it eventually led to my demise when an adversaries AC20 blew up the ammo in my right torso doing 60 points of damage blowing me up in grand fashion.

Then we met up with some friends who were playing Ugly Doll: 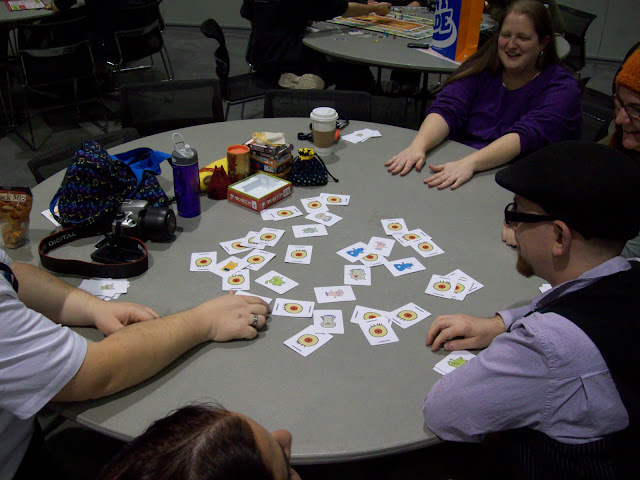 You flip over cards until 3 of the same card are shown at which point you slap one of the three and take it for your score pile. 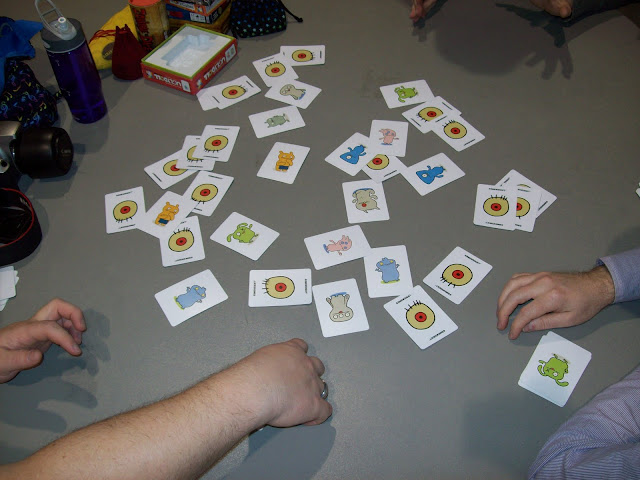 it looked like fun. Pooped and gamed out for the day I headed home.